This case looks at a situation where a patient’s recent implants and restorations had failed. Neither of the patient’s fixtures had integrated, so she reached out to a new surgeon, who then sought the expertise of a restorative dentist: Dr. Brady.

Keep reading to see how this collaborative team worked together with Gold Dust to create a gorgeous final result: 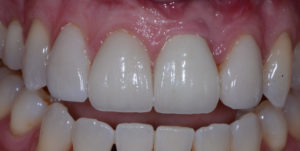 Placing her implants had been unsuccessful with her last team, so she switched to ours. I was contacted and then began the process of evaluating, diagnosing and treating her for a prosthetic.

The patient was very concerned about esthetics because of her executive-level work. She was committed to moving forward with an implant even though her prior surgeries had been unsuccessful and exhausting.

Through an oral exam I recognized that she had a scalloped tongue. This led to the conclusion of parafunctional activity but there was no evidence of occlusal disease. Overall, she had good oral health, except for the esthetic concerns and failed implants.

Alveolar and gingival reconstruction was then completed by the surgeon. This ensured the implant could be placed successfully where two prior attempts had failed.

My process began with capturing diagnostic records to create a wax-up, scan guide and surgical guide. Once the healing cap was placed, I gave Gold Dust the impressions, photographs and diagnostic data for models needed to fabricate custom screw-retained provisionals.

After the provisionals were placed and the patient’s tissue showed signs of maturing, a final Ivoclar Empress veneer and abutment were created by Gold Dust and placed.

Ultimately, this was a case that required intricate planning and detailed communication with the patient. Through stops and starts where the treatment plan was adjusted according to the patient’s healing and preferences, a beautiful result was attained.

Subscribe to get new techniques & articles delivered fresh to your inbox!